Did you ever buy a CB antenna stud mount, and it broke or bent in some days, but you never thought to return it just because it didn’t cost that much anyway?

You know every penny is precious. So why don’t you think of the best CB antenna stud mount for your CB antenna?

Let’s deal with some best stud mounts for CB antenna so that you can pick the best of bests.

Let’s make the deal simple. We have arranged a list of 5 standard CB antenna stud mounts for your ease.
However, these products won’t be perfect from all sides and specifications but they render top-notch features. And, majority of customers are using these products.
So, move with us. 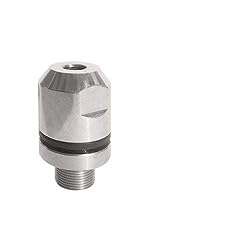 A standard stud mount is the heart of a CB antenna. Let’s enjoy one of the best quality stud mounts with a 3/8-24 Stud Mount.
With the various features, it has been the perfect base for the CB antenna.
It is a heavy-duty stud mount as it is made of pure and robust stainless steel. How amazing it is!!! Isn’t it?

Like a regular stud mount, it will fit through a standard 3/8″ hole. I like its plastic washer/insulator, which controls the overweight of the stud.
Perhaps, you won’t complain about what you pay for the product as it belongs to a quality class.
Most significantly, it comes with a 6-inch spring which gives the users the taste of a solid foundation. I can tell you about this stud mount because it is an excellent and beefy mount as a whole.

I love its heavy aluminum clamp with stainless steel hardware. Price is one of the essential factors, and the majority of customers are concern about this issue.
Interestingly, it comes with a reasonable price tag though it is a sturdy and well-made product. Almost everything you expect from the best CB antenna stud mount is available in Wilson 305-700.

Incredibly, it is a good gumdrop mount for both ham radio and CB antenna.
Wilson 305-700 comes with some improvements over Wilson 305-610. The mount we are reviewing comes with improved technology, more reliable materials than Wilson 305-610.
The only problem I have found on this mount is its bolts which need to be longer.
But, before buying the mount, make sure what size of bolts your newer trucks need to reach and secure together.
We expect the manufacturer will resolve this silly issue for the greatest sake of their business. You can also read Top 10 CB antenna for semi-trucks. 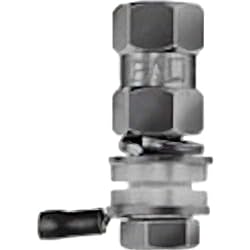 It is the most affordable stud mount on our review list. It is a wonderful delivery from FireStik.
FireStik is a well-known brand to make some of the best CB parts. Moreover, It fits and replaces other more inferior parts on the other guy’s mounts. How amazing it is!!!! Isn’t it?
I prefer FireStik K4 over any other basic FireStik mounts like FireStik R-4, R-4A, and K4A. You ask why? Well, the main reason is its coaxial cable and high-yielding performance.

Again, installing it is just like a breeze. But I am disappointed with its short bolts. If these bolts were a little bit longer, these would be a 100 % perfect match for all of the trucks and vehicles. You can also read Affordable CB antenna for the pickup trucks. 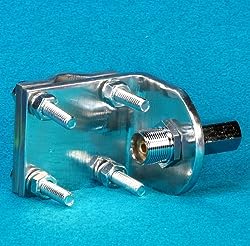 What is the specialty of Workman RV1? The thing is its battleship quality. So no worries for bending even at heavy load is there.
It is well and solid made. You can use its PL barrel to connect two CB cables. The hardware is entirely made of very thick aluminum.
Its stud adapter is made of high quality. Moreover, the price is pretty good. Furthermore, it is a lightweight mount that you love.
The bolts are short, and this problem is common in all stud mounts from WORKMAN. You can also read CB Radio For Off-Roading.
Check Price On Amazon

Let’s end our review with another Wilson CB antenna stud mount which is Wilson 305-600.
It is a better performing heavy-duty mount than most other “heavy-duty” mounts. Why? The reason is only it uses the entire so-239 connector as the mounting bolt.
You will find it very easy to install it on the roof of your vehicles. The cool thing about this mount is that you use it for a long time, but you find it after then like a new one.
Though the price is higher than the other items on our list, it is still the best one to the majority of the customers due to its functional benefits.
Again, the washer isn’t stainless. If it were stainless steel, it would have been the best of bests.
Check Price On Amazon

How to install a CB antenna stud mount?

Here is the main game. The CB antenna market is full of varieties. Different CB antenna mounts have different techniques and processes to fix with the antennas.

So, what should you do? To have the proper understanding, you need to go with some basics of installing the stud mount.  Here we go.

The construction material of a stud mount is essential. You ask why? Well, a CB antenna is fixed with the stud mount.
Therefore, it has to bear lots of pressure. If the stud mount isn’t well built with quality materials, it will break anytime.
So, to reduce the risks of damage, you need to buy a stud mount that resists any pressure.

The majority of people expect that they needn’t worry about it for a long time once they buy a product.
So, as a CB antenna stud mount customer, you need to think long. Choose a stud mount that is durable and solid.
Besides, get one that comes with warranty support.
Warranty support is an excellent criterion to judge a particular products’ durability.

You will get what you pay for, Isn’t it? So, figure out your budget. Then find out the product which matches your budget.
Be sure your chosen product doesn’t exceed your budget.
Remember one thing that a quality product charges a little bit more.

Question-1. Does a CB antenna mount need to be grounded?

Question-2. How high should a CB base antenna be from the stud mount?

We are optimistic that you have already selected a best quality CB antenna stud mount from our top pick.
One thing we can tell you that these products are pretty good and the majority of customers are using at least one of them.
So, if you are still confused with any particular point, then put a comment on the comment box.